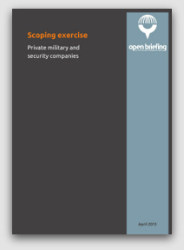 The increasing relevance of private military and security companies (PMSCs) is related to the progressive privatisation of war in all of its new expressions.

In March 2013, an Open Briefing consultancy team carried out a scoping exercise on behalf of the Remote Control Project (a pilot project of the Network for Social Change that is hosted by Oxford Research Group). The team collected and analysed information on NGOs undertaking advocacy/policy work related to the use of PMSCs and compiled a bibliography of recent relevant publications and recommended sources to follow.

Several recurring themes were identified during this research, including: