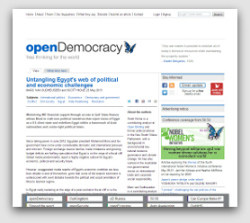 Since taking power in June 2012, Egyptian president Mohamed Morsi and his government have come under considerable domestic and international pressure and criticism.

However, exaggerated media reports of Egypt’s economic condition are less than reliable in and of themselves, given that some of the bearish sentiment is underscored with overt distaste towards the political and social orientation of Morsi’s Islamist regime.

Is Egypt really teetering on the edge of a post-revolution fiscal cliff or is the Morsi government simply muddling through economic stagnation and rising social tension while laying the groundwork to more effectively secure the long-term economic and political reorientation of Egypt?

Government administration in Egypt had come to a standstill after the 2011 revolution. As social unrest in the streets subsided with the army in control, the political process lurched forward, and a little over one year later, the Morsi government was inaugurated. But for an opposition movement that had been underground for decades this was a far from easy process. Upon securing the presidency, Morsi inherited an Egypt with considerable underlying economic and structural weaknesses. The initial complexities of running a government were overwhelming.

Since then, the opposition continues to mobilise substantial resistance and many government decisions are being heavily questioned (though in many instances without any credible policy alternatives being proposed). Constitutional discussions rage over Article 2, which outlines the relation between national legislation and the implementation of Sharia law, and legislative orders to centralise executive decision-making powers. More often, though, religion-based discussions distract from the urgency required to focus on economic development and improvement. Policy debates are dominated by political-cultural issues such as the legal marriage age rather than pressing decisions about strategies to reduce the national budget deficit. In some instances, these cultural battles and the increasing prominence of Islamist policy platforms for social and cultural change are compounding economic deterioration, particularly in the tourism sector.

In the meantime, there are concerns over pressing economic issues that may boil over onto the streets. Lack of employment opportunities will increase frustration and public disappointment in post-revolution Egypt. The use of ration cards is expected to result in large-scale social unrest if applied. With the summer approaching, many expect their air conditioning to not work properly because of frequent power failures. There has been a drop in the government foreign currency reserves available for imports, which may impact on the energy sector. Business owners are going bankrupt because they have to pay up front for any goods obtained from abroad (given the current situation, foreign suppliers are not taking any chances with credit lines to Egyptian customers). Everyone is trying to postpone payments where they can.

This will quickly become an unsustainable situation. The general expectation in Egypt is that the very poor will be the first to take to the streets again in protest. People in more wealthy neighbourhoods are installing reinforced doors and gates to prevent crowds from breaking into their homes.

A key pillar of Morsi’s political legitimacy is built upon rejection of Hosni Mubarak’s authoritarian capitalism and the endemic corruption exhibited by a business elite tied to the Mubarak regime. Political constituencies of the Freedom and Justice Party (FJP) and its coalition partners expect substantial revision of Egypt’s economic structure and redistribution of economic benefits across a broader spectrum of Egyptian society. However, the government’s ability to implement an economic programme distinct from Mubarak’s policies is severely constrained by imposing economic challenges.

Foreign exchange reserves have fallen from over $35 billion in January 2011 to a 15-year low of $13.5 billion in April 2013. In January 2013 alone, foreign exchange reserves dropped by $1.4 billion, far outpacing average month-to-month declines. Reserves have sunk below what the Central Bank of Egypt termed a ‘critical minimum level’ – a level which would cover the cost of three months of imports. Wheat imports ($5 billion), petroleum purchases ($9 billion) and external debt servicing ($8.5 billion) have all played a role in the decline of reserves, but it is the $13 billion in foreign reserve withdrawals in the form of capital flight that is particularly significant.

Reduction and stagnation in key foreign currency earners such as tourism, migrant labour remittance and revenue from Suez Canal tolls has put further pressure on reserves. Ongoing protests have had a particularly negative impact on Egypt’s tourism industry. Prior to January 2011, tourism represented approximately 11% of GDP and was a major source of foreign currency earnings. Tourism revenues are estimated to have dropped 20-30% since 2010 and the industry has suffered an estimated two million job losses. Overall, the official jobless rate ranges from 9% to 13%; however, youth unemployment (ages 15-24) was at 33% as of September 2012.

GDP growth between 2004 and 2010 – which peaked at 6% – has substantially declined since the removal of Mubarak and is now hovering around an anaemic 2%. Servicing a large external debt will become increasingly difficult as the local currency declines. With limited revenues but a strong public demand for government services to be provided, budget deficits remain high at almost 11% of GDP.

Turning the tide of the investment exodus from Egypt and domestic currency conversion is a critical component to sustainable economic stabilisation. Poor market fundamentals, fears of key industry re-nationalisation, winding back of Mubarak’s market liberalisation programme and political and security risks would be prominent concerns for international finance and investors. For some domestic investors, perceptions of politicised anti-corruption campaigns targeted against the business and industry elite who were affiliated with the Mubarak regime are likely to encourage exile of former business leaders or conversion and offshoring of assets. For Egyptians with savings, fear of economic and currency collapse is evidenced by the high demand at scheduled currency auctions.

The key challenge for Morsi is to encourage a degree of investment injection by addressing these interlinked and multifaceted concerns.

The Morsi administration will need to achieve some degree of success in stabilising the economy, arresting inflation and preventing currency devaluation if it is to tackle the larger macroeconomic challenges of shrinking reserves and unsustainable budget deficits. Egypt urgently requires an injection of capital and funds from regional supporters, key exporters and international financial institutions.

The military-appointed interim government initially requested a $3.2 billion loan from the IMF, most likely motivated by the crucial need for financial assistance and optics of IMF support. The Morsi government revised its request upwards to $4.8 billion; however, Egypt’s Planning Minister, Ashraf El-Araby, recently indicated a larger loan facility would be sought. While some economists suggest the loan facility is insufficient and will come too late to prevent the ongoing economic atrophy, the loan is one component of a limited portfolio of options for Egypt. Access to finance will be crucial for continued imports of commodities and is expected to present opportunities for greater multilateral concessional loans. However, it will come with conditions attached.

Egypt is no stranger to IMF structural adjustment programmes (SAP). Dire economic conditions and unsustainable debt burdens in the late 1980s left Mubarak’s regime little choice but to negotiate with the IMF, despite the significant US debt forgiveness which was a result of Egyptian cooperation in the first Gulf War. The IMF SAPs, deployed to address Egypt’s trade imbalances, inflation and fiscal deficits, required Mubarak’s regime to implement public sector privatisation and trade liberalisation and constrict fiscal policy.

The IMF has often held up Egyptian GDP growth and improved balance of trade through most of the 1990s and from 2004 to 2008 as positive results of its structural adjustment. However, a number of Egyptian political constituencies, opposition parties and the country’s civil society would characterise Mubarak’s IMF-inspired privatisation and trade and investment liberalisation as resulting in increased income disparity and poverty. Privatisation is alleged to have enriched Mubarak’s patronage networks, while public sector corruption became endemic.

As was the case in 1991 when Egypt signed an 18-month IMF standby agreement guaranteeing $372 million, the current loan facility will come with economic reform conditions. Previously proposed IMF loan conditions reportedly required reform on fuel and energy subsidies and a general reduction of the budget deficit down to 9% of GDP. To do this now, the Egyptian government would be pressed to reduce expenditure and raise revenue. One of the key elements of Egypt’s continuing budget deficits is a 75% subsidy on natural gas and petroleum fuel. The average yearly cost of fuel subsidies is around $7.4 billion and collectively energy subsidies comprise upward of 20% of government spending.

Depending upon the timing and scale of implementation, subsidy removal – particularly on diesel fuel and natural gas for cooking – is highly likely to trigger public outcry, civil disobedience and protest. Rapid subsidy removal, as opposed to targeted (fuel-specific) and staged reduction, is likely to be perceived as antithetical to the populist expectations of the Muslim Brotherhood’s key constituencies. Additionally, a miscalculation in timing of a fuel subsidy scale-back could compound inflation on food prices.

In the eyes of Morsi’s inner circle and the FJP, the IMF may be perceived as a financer of last resort – a financer that will likely inevitably compromise the FJP’s socio-economic and political restructuring of Egyptian society. Specifically, reluctance to enter into an IMF agreement may stem not only from the inability to meet conditions, but also from the political concern about the optics of a Morsi-IMF agreement. Some constituencies may seize on such an agreement as an indication of Morsi replacing the ‘Mubarak tycoons’ with ‘Islamist entrepreneurs’ and a return to Mubarak-style economic reform, which would substantially damage Morsi and the Muslim Brotherhood’s political legitimacy.

This partially explains the government’s enthusiasm for Gulf State financial support. Qatar has already provided $5 billion in loans and recently announced the purchase of $3 billion worth of Egyptian bonds. (Libya also announced the extension of a $2 billion five-year, no-interest loan.) Minimising IMF financial support through access to Gulf State finance allows Morsi to craft new political narratives that reject views of Egypt as a US client state and redefines Egypt within a framework of Arab nationalism and centre-right political Islam.

Preference for Gulf State financial support over IMF financial assistance raises two important questions the Egyptian government must answer. First, will the financial cost of accessing potentially high-interest Gulf State finance come with a larger repayment burden over the long term in comparison to non-concessional loans from the IMF and regional international financial institutions? Secondly, while Gulf State finance may improve Egypt’s numbers, will it restore investor confidence and increase foreign direct investment in the way IMF loans might?

The most likely short-term scenario is that Morsi will muddle through until after the parliamentary elections (the date of which has not yet been announced). The current government will of course try to manoeuvre themselves into such a position that they will survive the elections. Until then, overly draconic austerity measures should not be expected. This is probably a good thing because a severely weakened central government will never be able subsequently to push forward the economic reforms required by the current crisis situation.

In the medium term, the government needs to develop a variety of strategic plans. Here, lack of experience will be a major factor and, unfortunately, strategic thinking and a desire for innovative solutions is severely lacking in the current administration.

Finally, in the medium to long term, the government should not disregard southern Egypt or the rural and more remote areas like Sinai, or other outstanding complex issues linked to sectarian tensions. Such issues will be placed on the backburner while the government muddles through past the elections, but they must not be ignored for long.

This article by Open Briefing contributing analysts Marc van Oudheusden and Scott Hickie was originally published by openDemocracy on 23 May 2013.