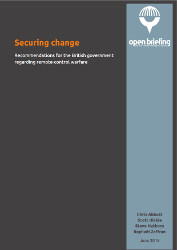 The United States has led the way in developing a new way of conceptualising and executing war.

The emphasis now is on effecting warfare at a distance by relying on smart technologies and light-footprint deployments rather than more traditional military approaches. With the rise of austerity in Europe, other Western states have adopted part or all of this ‘remote-control warfare’ approach.

Within this, policymakers and military planners are promoting the tactics and technologies judged to have worked during the war on terror and associated conflicts in Afghanistan and Iraq. As such, the five key aspects of remote-control warfare are: special-operations forces; private military and security companies; unmanned vehicles and autonomous weapons systems; intelligence, surveillance and reconnaissance; and cyber warfare.

Since April 2014, Open Briefing has produced a series of monthly intelligence briefings on remote-control warfare. These briefings are commissioned by the Remote Control project, which was initiated by the Network for Social Change and is hosted by Oxford Research Group. Every six months, Open Briefing undertakes a more in-depth assessment of trends in remote-control warfare. This report presents the findings from the second such review, and focuses on the issues of most significance to the United Kingdom, though they affect many other states too.

In the United Kingdom, the election of a Conservative-majority government in the May 2015 general election is unlikely to result in any significant departure from this approach. In fact, increased reliance on the tactics of remote-control warfare is likely as budget savings are made across Whitehall and the government responds to multiple security threats and conflicts around the world.

However, the assessment of recent trends contained in this report makes it increasingly clear that remote-control warfare has its limits. The report outlines some of the key unforeseen consequences from the use of remote-control warfare, including the transposition of Middle Eastern battlefields to Western cities through the deployment of special forces to respond to terrorist incidents at home, the enabling of adversaries to develop sophisticated cyber offensive capabilities through reverse engineering the cyber weapons deployed against them, and the risks presented by the terrorist use of weaponised civilian drones to attack critical national infrastructure or VIPs.

From the deployment of larger and more autonomous armed drones, to the development of ever more sophisticated cyber defence and offensive capabilities, this report also outlines the ways in which states are pursuing various ‘arms races’ in an attempt to maintain the strategic edge over their adversaries.

In light of these and the other trends discussed, this report makes the following 31 specific recommendations for the new British government.

In relation to special forces, the British government should:

In relation to private military and security companies, the British government should:

In relation to unmanned vehicles and autonomous weapons systems, the British government should:

In relation to intelligence, surveillance and reconnaissance, the British government should:

In relation to cyber warfare, the British government should:

What is ultimately needed is a comprehensive rethink of defence and security strategy and a move away from remote-control warfare towards more enduring, accountable and effective responses to today’s multiple security threats. While the planned Strategic Defence and Security Review and update of the National Security Strategy both present ideal opportunities for the United Kingdom to do this, previous strategy reviews have failed to live up to expectations in this regard.

The recommendations presented in this report will allow the British government to mitigate some of the pitfalls of the current strategy. The hope is that innovators within cabinet, parliament and the Ministry of Defence will take them up and leave their mark through the promotion of lasting stability and security in the United Kingdom and more globally.