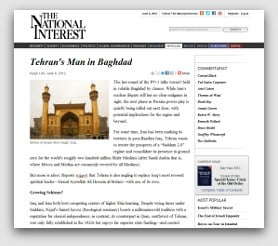 The last round of the P5+1 talks weren’t held in volatile Baghdad by chance. While Iran’s nuclear dispute still has no clear endgame in sight, the next phase in Persian power play is quietly being rolled out next door, with potential implications for the region and beyond.

For some time, Iran has been marking its territory in post-Baathist Iraq. Tehran wants to neuter the prospects of a “Saddam 2.0” regime and consolidate its presence in ground zero for the world’s roughly two hundred million Shiite Muslims (after Saudi Arabia that is, where Mecca and Medina are commonly revered by all Muslims).

But more is afoot. Reports suggest that Tehran is also angling to replace Iraq’s most revered spiritual leader—Grand Ayatollah Ali Hossein al-Sistani—with one of its own.

Iraq and Iran both host competing centers of higher Shia learning. Despite trying times under Saddam, Najaf’s famed hawza (theological seminary) boasts a millennium-old tradition with a reputation for clerical independence; in contrast, its counterpart in Qom, southwest of Tehran, was only fully established in the 1920s but enjoys far superior state funding—and control.

Lying at the core of tensions between both traditions, besides clerical subordination to state interests, is the interpretation of the authority of velayat-e-faqih, or the guardianship of the jurisprudent (in the temporary absence of the long-awaited infallible Twelfth Imam, Muhammad al-Mahdi). With some exceptions, Iraq’s Shiiite leaders generally refrain from active involvement in matters of state and consequently frown upon the political absolutism of Iran’s supreme leader Ali Khamenei and his predecessor Ayatollah Ruhollah Khomeini, the founder of the Islamic Republic.

Sistani, who was born in Mashhad in northeastern Iran before emigrating to Najaf, where he eventually inherited the hawzamantle from Grand Ayatollah Abu al-Qasim al-Khoei, is also widely recognized as the paramount marja-e-taqlid—or source of emulation—far beyond Iraq’s borders. This is even true to an extent in Iran, despite Khamenei’s counterclaims. (The only other Shiite marja who until his death in 2010 wielded any significant degree of independent influence was Lebanon’s Ayatollah Mohammed Hussein Fadlallah). However, Sistani is already eighty-two years old and reportedly frail of constitution, despite appearances. Whisperings of an eventual succession are expected to grow more audible.

The individual vying to take Sistani’s place also has been tipped as a possible candidate to replace Khamenei. Ayatollah Mahmoud Hashemi Shahroudi, sixty-four, is a Najaf-born cleric (with family links to northeastern Iran) who studied under the renowned Ayatollah Mohammed Baqir al-Sadr and later Khomeini himself.

When Saddam initiated the eight-year war against Iran, Shahroudi relocated east of the border and subsequently became Khomeini’s Iraq point-man and the first head of the Tehran-based Supreme Council of the Islamic Republic of Iraq (SCIRI). During this period, Saddam reportedly had a number of Shahroudi’s brothers arrested and executed.

Shahroudi is presently one of Khamenei’s closest confidants and a political heavyweight with a say in multiple governmental institutions, including the influential Guardian Council. Last year, Khamenei appointed him to chair a five-member committee tasked with arbitrating the heated disputes between President Ahmadinejad and the parliament, despite the existence of an official intragovernmental adjudicatory body known as the Expediency Discernment Council.

More significantly, Shahroudi served as the flagrantly inquisitorial and antireformist chief of Iran’s judiciary from 1999–2009. He is also believed to exercise immense sway over the younger, more militant generation of Shiite political leaders including Moktada al-Sadr in Iraq—the son-in-law of the late Ayatollah Baqir al-Sadr—and Hassan Nasrallah in Lebanon, both of whom have studied under him.

According to the New York Times, Shahroudi’s representatives have been “building a patronage network across Iraq [and] underwriting scholarships for students at the many seminaries” with Iranian funds since last October. This is clearly unfolding with the knowledge, if not blessing, of Iraqi prime minister Nuri al-Maliki and his Islamic Dawa party, which conveniently happen to be at odds with Najaf’s seminarians. Indeed, al-Maliki’s latest official visits to Tehran included separate but discrete audiences with Shahroudi.

Last year, Shahroudi also published his own manual of Islamic juridical rulings. This is a key step for any aspiring marja toward establishing a following. What’s more, he has also begun levying religious taxes amounting to a fifth of his followers’ income, although given his direct access to Iranian state resources this is significant merely because it cuts into the Iraqi and Sistani’s pie.

“Shahroudi possesses strong Iraqi credentials and yet relates well to the Islamic Republic’s official narrative … somewhat like Sistani in reverse,” Anoushiravan Ehteshami, professor of international relations at Durham University explained. Because Iran’s maximalist brand of Shiism hasn’t yet secured much hold in quietist Iraq, Shahroudi’s cross-border background could facilitate Iran’s buy-in. According to Ehteshami, Iran is not only positioning its own man at a time when the Sistani succession debate is becoming increasingly relevant but also testing the waters for Iraqi reactions.

Yet Shahroudi faces formidable obstacles in his undeclared quest. Having spent the latter half of his life as a key figure in revolutionary Iran, he is widely perceived to be an outsider, politically tainted and excessively militant. “Even if Shahroudi becomes a full-fledged marja, it is unlikely that anyone after Sistani will attain the same stature,” said Abbas Milani, director of Stanford University’s Iranian Studies department.

In mainstream Twelver Shiism, worshippers are free to choose their own source of emulation so that the position of paramountmarja can likewise only be decided by popular consensus. If Shahroudi were to succeed in indigenizing his clerical clout, there is still little guarantee that he would be popularly considered marja-e-taqlid, let alone fill Sistani’s shoes. Moreover, Iraq’s Shia remain sharply divided along faultlines that extend beyond the hostility between Najaf’s clerics and the Baghdad government. Some therefore believe that promoting Shahroudi at least dovetails with al-Maliki’s longer-term intentions to sideline the current marjayat, or traditional religious leadership. In a 2006 study published by the Washington Institute for Near East Policy, analyst and former Qom seminarian Mehdi Khalaji noted that as a result of successful Iranian cooptation and politicization of Shiite clerical networks, “Sistani may well be the last traditional [marja] not only in Iraq but also in the Shiite world.”

As our phone conversation drew to a close, Professor Milani added that “in the longer haul, Iraqi nationalism will determine the character of Iraqi Shiism, or in other words mellat [nation] over ummat [the transnational community of the faithful].”

Given the ecumenical preeminence of Iraq’s Shiite holy places and marjayat, a post-Sistani order yoked to Iran’s powerful body politic could bring about a radical realignment in an arc stretching from Lebanon through Bahrain to Pakistan and India—and a far stronger diplomatic hand for Tehran. Iranian hard cash and soft power continue to make inroads into countries with significant Shiite communities such as neighboring Afghanistan, where it now controls a third of the media, and Lebanon, where overeager infrastructure financing suggests it may be bracing itself for the fall of the House of Assad, its embattled Syrian ally. As Paul McGeough wrote recently, the Sistani transition also threatens to undo everything Washington has invested—including some five thousand soldiers’ lives—in part to steer Iraq away from the Islamic Republic’s embrace.

Of course, Ayatollah Mahmoud Hashemi Shahroudi’s alleged designs on Iraq’s marjayat isn’t quite yet a foregone conclusion. But even if near-impeccable clerical credentials and financial largesse fail to win the hearts and minds of Iraq’s Shia, Shahroudi could always set his sights on the office of Iran’s third supreme leader. Whatever happens, Khamenei’s protégé will shape the region’s landscape for years to come.

This article by Open Briefing contributing analyst Kevjn Lim was originally published by The National Interest on 8 June 2012.