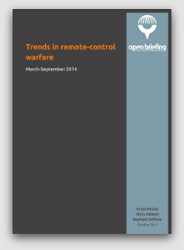 Remote-control warfare is an emerging military and political framework that allows for warfare to be actioned at a distance by relying on ‘smart’ technologies and light-footprint deployments, such as armed drones and special forces.

While in some respects it is more attractive than traditional military approaches, it has two significant disadvantages. Firstly, it allows actions to be approved that would never be considered using conventional military means, yet the consequences and risks of those actions are not being adequately considered. Secondly, it removes policymakers and military planners one step further from the realities of war fighting for both the military operators and civilian casualties. However, these downsides are being ignored as policymakers struggle to respond to multiple conflicts and security threats around the world.

Since April 2014, Open Briefing has produced a series of monthly intelligence briefings on remote-control warfare. These briefings were commissioned by the Remote Control project, which was initiated by the Network for Social Change and is hosted by Oxford Research Group. These briefings focus on five key areas of remote-control warfare: special operations forces (SOF); private military and security companies (PMSCs); unmanned vehicles and autonomous weapons systems; cyber warfare; and intelligence, surveillance and reconnaissance (ISR). These are the areas that Open Briefing considers central to the development and application of remote-control warfare.

Over the course of the past six months, it has become apparent that in some areas there is a disconnect between civil society perception and the actual intentions and capabilities of governments and militaries. This is due, in part, to a lack of detailed understanding of ongoing technological, political and doctrinal developments in certain key areas, including lethal autonomous weapons systems and cyber warfare. Open Briefing’s monthly briefings address this by providing comprehensive but concise explanations and analysis of such developments.

Conversely, in other areas, civil society is driving the debate and forcing governments to enact reforms. This is particularly so in the cases of armed drones, mercenaries and mass surveillance. In such instances, Open Briefing’s monthly briefings bolster civil society efforts through the provision of timely and reliable intelligence, which allows organisations to develop more-effective advocacy strategies.

This publication differs from the usual monthly format in that it provides a detailed overview of the key trends in remote-control warfare that have emerged during the period covered by the previous five briefings (March to September 2014). Such developments include the United States and European countries increasing their SOF footprints across Africa, PMSCs playing increasingly important roles in Afghanistan and Iraq, the debate over unmanned aerial vehicles shifting to questions over effectiveness and developing international norms, the United States seeking international cyber-security norms while clashing with China over cyber espionage, and NSA leaks forcing Five Eyes partners to reconfigure and justify their surveillance activities. These, and the other events analysed in this report, are significant developments in remote-control warfare that warrant the deeper look provided in this briefing.

This report is also published in New ways of war: Is remote control warfare effective? by the Remote Control project.