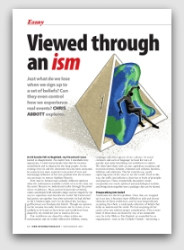 As US bombs fell on Baghdad, my friend and I were locked in disagreement. No matter how I marshalled my arguments, I could not persuade him that the invasion would likely end in disaster for the Iraqi people.

As the evening wore on and the discussion became more animated, he seemed even more resistant to my point of view and increasingly defensive of his own position that the invasion was necessary to remove Saddam Hussein.

How had we formed such radically different opinions when the information available to both of us at the time was the same? Because we understand reality through the prism of our worldviews. These mental frameworks of beliefs, values and deeply held attitudes shape and are shaped by the way we experience and describe the world. My friend and I had grown up together, but after university he had drifted to the Christian right and I to the liberal left, leaving a gulf between our fundamental beliefs. Though my opinion on the invasion has sadly been borne out by events, it was unlikely to be based on facts alone and would have been shaped by my worldview just as much as his was.

Our worldviews are shared by others within our communities and are widely reflected in folklore, music, language and other aspects of our cultures. As social creatures and users of language we look for ways of quickly and easily describing our worldviews to others. We often label them with an ism: capitalism, socialism and neoconservatism; Judaism, Islamism and atheism; fatalism, nihilism and relativism. The list stretches on, neatly capturing some of the ways we see the world. Used in this way, the suffix ism indicates a doctrine or body of principles and practices. These wonderfully descriptive words encapsulate our social, spiritual and psychological realities and bring them together into a package that can be shared.

And herein lies the first problem. Once they are wrapped up in an ism, it becomes more difficult to pick and choose elements of those worldviews, and we may sleepwalk into accepting the whole: a readymade collection of beliefs that helps us understand the world. We risk accepting all the tenets of an ism without proper consideration. This is more likely if those ideas are shared by way of an immutable text, be it the Bible or Das Kapital, or controlled by an organization – such as the Catholic Church – restricting a person’s ability to interpret doctrine.

Fundamentalists can be found at every level and in every arena of human society. They represent the antithesis of free thought, but in some respects the positions they adopt are not surprising: psychologists have identified several shortcuts and biases common to human thought that make such inflexible mindsets more likely. First, when gathering and selecting information, that which confirms preconceptions is generally favoured, regardless of whether it is true or not. The proliferation of websites, blogs, satellite channels and independent media makes it easy to find such supporting information. Second, when interpreting that information, ambiguous details are generally taken as supporting one’s existing position, rather than raising doubts. Worse, verifiably true information does not necessarily counter misinformation and may actually lead people to become more entrenched in their views, particularly if they care deeply about the issue.

Such systematic errors of memory, attribution and probability help explain why, for example, Fox News is one of the most popular and trusted news channels in the United States; why 9/11 conspiracy theories continue to circulate; or why my friend and I disagreed over the Iraq war. These cognitive biases – to which we are all susceptible – help cement our worldviews, making it difficult for others to challenge them. Wrap it all up in an ism and it becomes the ‘Truth’, making change nigh impossible.

Us and them must meet

These isms also allow us to recognize others who share similar worldviews and so help to create communities of like-minded people. But by doing so, they encourage us to divide the world into ‘them’ and ‘us’. And this is where the real dangers lie. The creation of in-groups and out-groups is a fundamental process of human organization, and one that in turn creates powerful biases. Humans have a tendency to see members of other groups as homogeneous and to attribute their failures to characteristics of the group. In contrast, we see members of our own group as more diverse and attribute our failures to situational factors. We are also far more likely to give preferential treatment to those whom we perceive to be members of our own group.

This is reflected on the world stage. Politicians and others instinctively and simplistically divide the world up into ‘good’ countries and ‘bad’ in order to understand better and attempt to control what is going on around them. They create a geopolitical ‘them and us’, which takes away from our shared humanity and leads us inextricably into conflict. This manifests itself today in the false dichotomy between the international community and rogue states: a somewhat meaningless distinction, as the foreign policies of the United States and the United Kingdom, for example, are at times more aggressive and destabilizing than any enacted by the countries of the so-called Axis of Evil. In any case, there can no longer be a them and us in the face of the serious environmental problems that will shape the course of this century: they will affect us all.

Ludwig Wittgenstein argued: ‘We see the world the way we do not because that is the way it is, but because we have these ways of seeing.’ He was not simply referring to differences in interpretation but to differences in the expression of the actual visual experience. This seems to reflect accurately the impact of our worldviews: we do not simply interpret the world differently, but experience it differently; it is not about perception but actual sensation. To accept that we see the world the way we do because of our ways of seeing – our worldviews – is also to understand that the experience of events can change over both time and place. We need to be able to view these events through others’ eyes. This does not mean embracing moral relativism, but we should at least be able to empathize with and understand others’ experiences. In the same vein, we need to challenge our own understanding of events. After all, it is not necessarily objective reality that is important in human interactions, but people’s experience of that reality.

This is, however, only my point of view – you might see the world differently. Just try not to view it through an ism.

This article was first published in the July/August 2011 edition of New Internationalist as part of our psychology of security project.

View e-publication on Issuu or Scribd