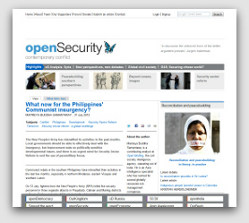 The New People’s Army has intensified its activities in the past months. Local governments should be able to effectively deal with the insurgency, but improvement rests on politically sensitive developmental issues, and there is an urgent need for Security Sector Reform to end the use of paramilitary forces.

Communist rebels in the southern Philippines have intensified their activities in the last few months, especially in northern Mindanao, eastern Visayas and southern Luzon.

The recent spur in violence can be seen in the light of three major events: the 29 March NPA Anniversary; the Cordillera Day celebration in April to symbolically mark the struggle of the indigenous peoples in the Cordillera region demanding the withdrawal of military troops from their areas and an end to exploitation of community lands; and the Five Year Plan, which will be concluded in 2013. It is usual for the rebels to intensify their violence during the months around such events in order to garner publicity.

The Philippines authorities have also intensified counterinsurgency operations. On 30 June, the security agencies killed at least 13 NPA cadres in two separate operations in Zambales and Quezon Provinces. This was considered the biggest loss for the rebels in a single day this year. In recent months, the Armed Forces of the Philippines (AFP) have declared over 20 southern provinces rebel-free.

But, while the government’s counterinsurgency strategy has diminished their numbers, it has not been able to decimate the organisation.

The NPA is the armed wing of the Communist Party of the Philippines (CPP) and the CPP is a constituent of the far-left coalition the National Democratic Front (NDF) of Philippines, which was formed in 1969. The group believes that the solution to the country’s three major problems– US imperialism, bureaucratic capitalism and feudalism –lies in a protracted people’s war operating out of rural bases in the countryside. According to a recent government estimates, the NPA has a total strength of more than 4,000 fighters in the country. It was designated a Foreign Terrorist Organization by the United States in 2002 and by the EU in 2005.

Various government agencies have been in intermittent and inconclusive peace talks with representatives of the Communist groups since 1986. Recent peace talks between the Philippines authorities and representatives of the NDF held in Oslo, Norway, during 14-15 June, ended in deadlock due to fresh NPA attacks during the talks and rigid rebel conditionality to release at least 356 alleged political prisoners and to have 14 rebels covered by immunity guarantees. Prior to that, in a rare gesture, the Philippine Army’s Third Infantry (Spearhead) Division has intended to start comprehensive peace negotiations with all Communist groups in the Western Visayas region, along with intensification of developmental activities.

Given the recent rise in violence, it seems pertinent to make a realistic assessment of the ongoing Communist violence – considered the longest-running Communist insurgency in Asia – its impact on the larger socioeconomic and political fabric of the country, the direction of the movement since its inception, and future prospects.

The risk from the Communist insurgency remains high but is likely to reduce in the next few years. Seemingly, Communist rebels are not receiving the requisite ideological and financial support that they were from their partners – including China and Vietnam (and the erstwhile USSR) – given the strengthening of bilateral relations of these countries with Philippines. As a result, rebels are relying more on local populations and businesses to sustain their momentum. Their recent activities are confined to small scale hit and run attacks, murders, extortion and propaganda. As a result, of late the local population has started losing trust in guerrilla warfare because of the high casualty of innocent civilians.

The movement’s failure to tap the middle class and educated youth has also accentuated the disorientation of the group. The role of this demographic can hardly be belittled in any contemporary revolution, as was clearly demonstrated in the Arab Spring. Business owners, especially of mines, plantations, transport and telecommunications companies, are apprehensive of the intentions of the rebels due to persistent extortion demands under the garb of “revolutionary taxes.”

The group has also lost its so-called moral high ground by forcibly using children in their struggle which has been severely condemned by various organizations, including the United Nations Security Council. Government developmental initiatives focussing on agrarian reform and poverty alleviation programs with incentive-based rehabilitation packages in the affected areas have also made positive impact on the poor, who may be more vulnerable to recruitment by the rebels.

The group has also been grappling with its own internal problems.

Firstly, the killing and torture of over 3,000 Communist members and sympathizers suspected of being government agents in the early 1980s struck a blow to the Communist rebel unity. Later, factional feuding erupted over strategy and tactics within the group. In the early 1990s, the Reaffirmists, led by NPA founder Jose Maria Sison, who is in exile in the Netherlands, wanted to reaffirm the centrality of protracted armed struggle by guerrilla forces, while the Rejectionists, led by Popoy Lagman, was strongly in favour of sudden armed insurrection by dedicated NPA battalions as a shortcut to seize power. This development has led to a serious split in the group and, by 2000, the local Communist movement had splintered into at least eight factions.

Confusion also erupted during this period over whether to focus on rural or urban areas. There has been a gradual disenchantment among the NPA cadres due to the notion that their leader, Sison, has been leading a presumably comfortable life in the Netherlands since 1987 (after his 1977-86 detention), while the cadres at home have been struggling for their survival in the rural mountainous areas. That feeling was further reinforced when Sison was photographed dancing with popular Philippines actress Ara Mina at a Christmas party in the Netherlands in 2006.

Overall, the security environment of the country is changing for the better. In the 2012 Global Peace Index by the Institute for Economics and Peace, the Philippines ranks among the top five nations that registered “improvements in peacefulness.” The Pulse Asia’s Ulat ng Bayan survey also gave high approval ratings to the Aquino administration’s efforts in “increasing peace in the country.”

The need of the hour is a proactive conflict-prevention strategy, which should take into consideration: (a) the necessity of carrying forward dialogue, (b) developmental initiatives in affected areas, (c) intensification of counterinsurgency measures, and (d) prioritizing foreign policy initiatives with potential insurgency supporters among neighbouring countries. These elements are outlined below.

It needs to be understood that left-wing extremism in Philippines is not a national security issue in its current shape; rather it is a localized problem, which can be solved by local governments in coordination with Manila. The government must push for local level peace talks instead of talks at the national level or a third party brokered peace. Rebels usually want national level or third party level dialogue for international publicity of their cause. Successful peace talks are urgently necessary: in the future, Communist insurgencies may be led by more irrational and violent groups, making negotiations much tougher. (A similar apprehension was raised by the leadership of Islamic rebel groups, including MILF, urging the government to expedite the negotiations and peace settlements with the present leadership.)

Most of the rebel strongholds are still remote, inaccessible, forested and with lack of desired infrastructure and basic amenities including roads, power, education, water, health and medical facilities. These areas do not attract the interest of public servants and mainstream political leaders and they have been neglected for too long. Mining and forest mafias are, however, keen to operate in this area in order to exploit natural resources to reap profits. There is an urgent need to improve the delivery of basic services and infrastructure and ensure efficient and effective public-oriented administration in the affected areas.

However, an insecure environment can become an effective structural constraint in achieving developmental objectives. A sense of security is essential to carry out developmental activities by the public servants and development professionals in the rebel stronghold. Therefore, intensification of counterinsurgency measures should continue, specifically those designed to neutralize the NPA foot soldiers, which in turn will immobilize its leaders. The government must strengthen its intelligence network and make greater use of reconnaissance Unmanned Aerial Vehicles (UAVs) in support of precision strikes. However, adequate safeguards and accountability must be put in place to check security forces from resorting to human rights violation or violating the laws of the war. There is an urgent need for reform in the AFP and the Philippine National Police (PNP) in order to successfully withstand Communist rebel onslaught and to stop the current reliance on tribal militias and paramilitary forces that are often poorly supervised and commit human rights violations. The government needs to target the nexus of local bureaucracy with the rebel groups and their affiliated organizations. Once the influence of rebels is lessened in any area, the government must quickly deploy dedicated public servants with a thorough knowledge of local conditions in the region for better service delivery and implementation of developmental goals.

Bilateral relationships with Russia and the Communist governments of China and Vietnam need to be strengthened as the Philippines Communist rebels have historically been thought to have received support from these governments. The Philippines government must also develop a realistic strategy to engage with United States, given the anti-American stance of the Communist movement. Serious efforts must be made by the government to dispel the impression that US policy has always economically benefited the Filipino elite – the Marcoses, the Macapagal-Arroyos and the current presidential family, the Cojuangco-Aquinos – and that the United States is gradually making the Philippines a staging ground for its Asia ‘pivot,’ a development considered by rebels as an affront to Philippine national sovereignty, territorial integrity and the people’s right to self-determination.