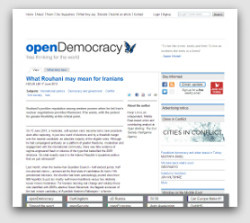 On 15 June 2013, a moderate, soft-spoken cleric became Iran’s next president-elect after capturing, in just one round of elections and by a threefold margin over the nearest candidate, an absolute majority of the eligible votes.

Although he had campaigned profusely on a platform of greater freedoms, moderation and engagement with the international community, there was little evidence of regime-engineered fraud or violence of the type that bedevilled the 2009 elections. So what exactly was it in the Islamic Republic’s byzantine politics that we just witnessed?

Last month, when the twelve-man Guardian Council – half elected jurists, half non-elected clerics – announced the final slate of candidates for Iran’s 11th presidential elections, the shortlist had been painstakingly pruned down from 686 hopefuls to just six mostly well-known hardliners versus two relatively lesser known moderates. For Iranians desiring real change and notably those who identified with 2009’s abortive Green Movement, the flagrant exclusion of the last minute candidacy of Ayatollah Hashemi Rafsanjani – a former president, arguably Iran’s most powerful individual after Ayatollah Khamenei, but one many perceive capable of redeeming the economy and closing the gaps with the international community – was another slap in the face.

The rejection might have been anticipated. Rafsanjani didn’t only fall out with the ruling ultraconservatives (or ‘principlists’) and particularly his one-time buddy Khamenei in recent years – he openly backed the reformists in 2009, an act so anathema it would exact its political pound of flesh from him. Meanwhile, the election campaign revved into full gear with much of the initial focus shifting onto Saeed Jalili, the abstrusely doctrinaire, one-legged chief nuclear negotiator and Khamenei’s presumed favourite, who in response to Iran’s thickening crisis grandly offered even more ‘resistance’.

Then mere days before the elections, two candidates bowed out. Gholam-Ali Haddad Adel, a former speaker of parliament and the father-in-law of Khamenei’s son Mojtaba did so without endorsing any other candidate, not that it mattered since five others were still competing for the conservative vote. But it was the withdrawal of Mohammad Reza Aref, the erstwhile reformist vice-president under Mohammad Khatami, upon the latter’s prompting, that would change the entire equation by allowing moderates and potentially reformists to rally behind a single candidate: Hassan Rouhani.

And this, contrary to expectations, was exactly what happened.

While he has received critical public endorsement from Rafsanjani and Khatami, and has held sensitive posts in key security and political institutions (he was a former nuclear envoy under the Khatami government and ex-secretary of the Supreme National Security Council, and is still a member of the Assembly of Experts and the Expediency Council), the 64 year-old Rouhani is remarkable in being the only cleric, and unlike the runner-up and Tehran’s popular mayor Mohammad Bagher Ghalibaf, possesses little technocratic experience in economic issues – the key axis of electoral competition. This suggests that many more may have voted for him in protest against the status quo rather than in earnest.

Considering the type and state of competition Rouhani faced, this may not come as a surprise. Despite having consolidated their influence as a bloc by the time of the March 2012 parliamentary elections, the regime’s hardliners have increasingly succumbed to infighting of a very public and hence reflexively damaging sort. During Ahmadinejad’s second term, this disunity deepened when the president challenged the Supreme Leader over the firing of the intelligence minister, and further intensified when Ahmadinejad and his chief-of-staff and alter ego, Esfandiar Rahim Mashaei entertained talk of direct communication with the Hidden Imam, which attracted inquisitorial denunciations of ‘deviancy’. During these elections, and let alone others, even the carefully strategized trilateral (or ‘2+1’) coalition comprising Ghalibaf, Haddad Adel and Velayati, the latter a longtime Iranian foreign minister and Khamenei’s foreign policy adviser, couldn’t find it in itself to unify behind one figure (whereas Haddad Adel withdrew, Velayati continued to compete with Ghalibaf until the end).

Of course, Supreme Leader Khamenei faces something of a dilemma given that he has been associated most closely with the ultraconservative-principlist camp. While he may be the ultimate arbiter in sensitive national security issues, including the nuclear dossier, his authority isn’t absolute despite his epithet, for it reposes on his ability to balance multiple and at times mutually adversarial interests, only one of which (albeit the most powerful) is the Revolutionary Guards. Furthermore, as Iran’s de facto ruler, he has evinced sufficient appreciation for legitimacy so much so that just days back, he even exhorted Iranians who aren’t supporters of the regime to the ballots simply “for the sake of the country”. The upshot of the painful fallout from the contested 2009 elections, which posed a grave challenge to Khamenei and the regime, was the lesson that became enacted into a merciless and highly exclusionary vetting mechanism by the Guardian Council this time round.

Given this fact and his inclusion in the final octet, Rouhani’s victory could even have been anticipated. But the truth is that the new president – and only hindsight will prove his reformist credentials – actually benefits Khamenei more than meets the eye. While not obsequious like Jalili or some of the other principlists might have been, Rouhani is still cut very much from the same establishment cloth and his positive reputation among western powers when he led Iran’s nuclear negotiations provides Khamenei with the pretext for greater flexibility at this critical point – that is, if he wants, for Khamenei’s motives are notoriously hard to decipher. The intervening downtime might also force greater unity among the principlists before the next electoral cycle.

Let’s be clear. Rouhani’s presidency will in all likelihood not portend a change of direction that reformists and the more liberal moderates demand, so much as a change of tone. Moreover, for his victory to match its newly acquired political symbolism, Rouhani will have to scale a formidable wall of institutional and personal constraints, no cakewalk as every former president since the Islamic Revolution will attest to. But given the infernal desperation of Iranians and the simple fact that he is no Ahmadinejad means that he might very well be starting off on the right foot already.

This article by Open Briefing contributing analyst Kevjn Lim was first published by openDemocracy on 17 June 2013.