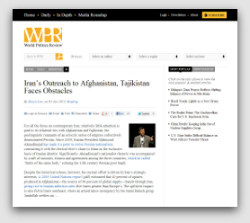 For all the focus on contemporary Iran, relatively little attention is paid to its trilateral ties with Afghanistan and Tajikistan, the geolinguistic remnants of an eclectic series of empires collectively denominated Persian.

Since 2005, Iranian President Mahmoud Ahmadinejad has made it a point to revive Persian nationalism, contrasting it with the clerical elite’s claim to Islam as the exclusive basis of Iranian identity. Significantly, Ahmadinejad’s nationalist rhetoric was accompanied by a raft of summits, forums and agreements among the three countries, which he called“limbs of the same body,” echoing the 13th-century Persian poet Saadi.

Despite the historical echoes, however, the current effort is driven by Iran’s strategic interests. A 2009 United Nations report estimated that 40 percent of opiates produced in Afghanistan—the source of 90 percent of global supply—transit through Iran,giving rise to Iranian addiction rates five times greater than Europe’s. The spillover impact is also felt in Iran’s southeast, where an armed narco-insurgency by the Sunni Baluch group Jundollah seethes on.

Afghanistan’s successive wars have moreover burdened Iran with the world’s largest refugee population after Pakistan. Iran’s treatment of Afghan refugees, including execution and deportation, has raised tensions with Kabul. This may be linked to another focus of Iranian interest involving an ongoing dispute over the Helmand River, which irrigates the parched Sistan basin that spans the border, rendering Iran vulnerable to Afghan dam construction.