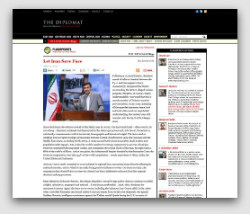 Following a 15-month hiatus, the latest round of talks in Istanbul between the P5+1 and Iran appear to have momentarily dampened the bluster surrounding the latter’s alleged nuclear program.

Skeptics, of course, remain understandably convinced that this is merely another of Tehran’s tactical prevarications. In any case, assuming all this guarded optimism bears fruit and both sides reach an improbable understanding, the nuclear issue still remains only the tip of a (far) deeper issue.

Since the Islamic Revolution took all of the Shah’s men by storm, Iran has found itself – often even by its own doing – shunned, contained and demonized by the status quo powers and, let’s face it, forced into a role hardly commensurate with its territorial, demographic and historical weight. The facts need no retelling: Iran occupies strategic prime estate between Central-Southwestern Asia, the Caucasus and the Middle East where, excluding North Africa, it ranks second both in land area (after Saudi Arabia) and population (after Egypt). Iran is also the world’s number two energy superpower in proven oil and gas reserves combined following Saudi Arabia, and commands the critical Strait of Hormuz, through which a fifth of the world’s oil flows. And at one point, the Achaemenid Empire founded by that humanist Cyrus the Great encompassed no less than 44% of the world’s population – nearly equivalent to China, India, the United States and Indonesia.

And yet, Iran is rarely consulted or even included in regional fora concerning issues directly affecting its national interests, and on which it can easily bring positive influence to bear. On closer scrutiny, the ongoing nuclear standoff also in some way stems from Iran’s deliberate exclusion from the regional decision-making processes.

Deep behind its firebrand rhetoric, the Islamic Republic’s actual foreign policy choices continue to exhibit a highly calculative, pragmatic and rational – if not always predictable – slant, with a fondness for asymmetric means. Again, the facts are no secret, including the infamous Iran-Contra affair in the 1980s when Ayatollah Khomeini sanctioned indirect arms purchases from Israel in his desperate war against Saddam Hussain; intelligence assistance against the Taliban and al-Qaeda during the U.S. invasion of Afghanistan; support for Christian Armenia in its conflict with officially Shiite Azerbaijan; and, among others, when it turned a blind eye towards both Russia’s war against Sunni Chechen separatists and China’s repression of Xinjiang’s ethnic Uighurs.

Unfortunately, Iran’s previous spurned attempts at détente or cooperation have only reinforced the conviction that the U.S. seeks full-fledged regime rather than behavioral change. Iran granted the United States flyover rights during the first Gulf War only to be snubbed by Washington. By 1991, Iran found itself completely cut out of the Madrid Peace Conference even though dozens of countries and groups were involved. In 1995, then President Akbar Hashemi Rafsanjani offered a $1 billion preferential deal to U.S. energy giant Conoco to develop offshore fields, but was slapped with further trade sanctions from Capitol Hill despite earlier positive signals from the Bill Clinton administration. And mere weeks after the relatively reformist Mohammad Khatami government offered sympathy to the United States following the September 11, 2001 attacks, President George W. Bush rewarded Iran by lumping it into the “Axis of Evil.”

If nuclear diplomacy is to succeed and eventually lead toward a “comprehensive negotiated solution which restores international confidence in the exclusively peaceful nature of the Iranian nuclear program,” as EU foreign policy chief Catherine Ashton told journalists last weekend, world leaders – including the Israeli government – might need to consider simultaneously reengaging Iran on a broader and more constructive basis.

At the same time, policymaking should better resonate with Iran’s real strategic worth if the Middle East’s most dangerous geopolitical imbalance is to be rectified somewhat. In other words, Iran’s aspirations as a nation should be allowed to match the sum of its resources, but clearly in a manner consistent with the national interests of its regional neighbors, including Israel and the Persian Gulf countries.

This is where the “step-by-step approach and reciprocity” scripted into the Istanbul talks can be equally valuable. Co-opting Iran as an active stakeholder in regional decisions moreover distributes the security burden more equitably and allows for a greater range of issues to be directly broached, such as Iran’s human rights concerns and the narcotics problem originating in neighboring Afghanistan.

In return, Tehran needs to mollify its stance and rhetoric towards the West and particularly Israel, and cease supporting asymmetrical elements prejudicial to their interests. Indeed, Iran would have much less reason to rely on “terrorism” as a continuation of politics if it could cut deals as an equal. In the later part of the 1990s, Iran’s relative position of strength in the Arab world was accompanied by a decrease in its anti-Israel rhetoric simply because it wasn’t necessary.

Recognizing Iran as a responsible power in the region while gently muzzling its nuclear ambitions allows its leaders to “save face,” more importantly. Often regarded with a mixture of mirth and outright bewilderment in the West, this critical concept has been one of the Orient’s historical determinants of war and peace.

Viewed from the West, Iran continues to cast a disturbingly long shadow. But privileging an awfully big stick in response that hasn’t really delivered results over the past 33 years – the same time span that neighboring Afghanistan has been ravaged by armed conflict – should already be ringing bells. Rather than waiting out another 33 years with far higher nuclear stakes, maybe it is really time to change the tune.

This article by Open Briefing contributing analyst Kevjn Lim was originally published by The Diplomat on 21 April 2012.