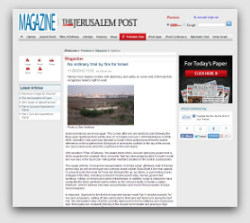 Israel and Hamas are at war again. This comes after only one electoral cycle following the three-week nightmare that cost the lives of 13 Israelis and over 1,400 Palestinians in 2008-2009.

Operation Cast Lead was intended by Israel’s then-centrist government to restore deterrence on the southern front. But typical of unresolved conflicts in this neck of the woods, one round barely ends when the countdown to the next begins.

With operation “Pillar of Defense,” the stated intent of the Likud-led right-wing government is still to suppress the constant “terror of rockets” that has been plaguing cities in Israel’s south and now also in the Gush Dan metropolitan heartland situated on the central coastal plains.

This began with the 14 November assassination of Ahmed Jabari, effectively chief of Hamas’ armed wing as well as the figure who oversaw Israeli soldier Gilad Shalit’s five-year captivity. To prove its point, the Israel Air Force has followed this up, as before, by pummeling scores of targets in the Strip, including rocket and missile launch sites, Hamas government buildings, military command and control infrastructure. In addition, Israel is believed to have conducted the strike just three weeks before on the Yarmouk facility in Sudan’s capital Khartoum, which it believes had been subcontracted out to Iran for the production of Gaza-bound weaponry.

In response, Gaza has for the first time launched Iranian-made Fajr-5 missiles towards Tel Aviv (and Jerusalem), setting off daily aerial alarms that were last heard only during the Gulf War. The interception rates of all five currently deployed Iron Dome batteries are impressively high. But Israelis are constantly thinking of the closest bomb shelter and praying to high heavens for that somewhat muffled aerial boom of an intercepted missile, or, as has been the case in more southerly cities like Ashdod, wondering whether their home is next in this perverse game of roulette.

Attacking Tel Aviv is clearly a non-negotiable trip-line for an Israeli ground invasion but also serves sharp notice to Israel’s leaders that the Jewish State is more vulnerable than ever. Indeed, Gaza’s procurement of Iranian medium-range missiles to supplement its arsenal of indigenously manufactured short-range tactical rockets heightened the imperative for the “Pillar of Defense” operation.

To be sure, since the start of Hamas’ de facto government in the Mediterranean enclave, other, more militant factions, including Palestinian Islamic Jihad, the Popular Resistance Committees and the Popular Front for the Liberation of Palestine have been responsible for many of the rockets launched onto Israeli territory – sometimes contrary even to Hamas’ wishes. Moreover, the fall of the Mubarak regime in Egypt and contemporaneous regional geopolitical shifts have turned the Sinai into a magnet for Jihadists making common cause with Gaza’s militants.

By all accounts, an Israeli ground incursion appears probable, especially with a view to the complete destruction of Hamas’ Fajr-5 arsenal. The security cabinet has approved the mobilization of up to 75,000 reservists, possibly to prepare for any military adventurism from the northern front. The government has stated that Israel is doing all in its power to avoid civilian Palestinian casualties – a tall order for what is routinely characterized as the world’s densest built-up territory. But while Israel – or even Hamas for that matter – maintains the right to self-defense, it must take the lessons of Cast Lead and the Second Lebanon War to heart by meticulously observing proportionality, military necessity and most crucially, the protection of civilians.

It goes without saying that Hamas and the factions operating under its aegis need to respect these same rules, particularly the clear distinction between combatant and civilian both at home and across the border. The asymmetry of information and means cannot excuse negligence under any circumstances. In an age of warfare overwhelmingly defined by urban battle spaces, guerilla tactics and the blurring of combatant identities, playing by the rules governing armed conflict is the best way – or at least the lesser of two evils – of affording protection to civilians on all sides – beginning with the right to live.

Given the steep humanitarian and psycho-emotional costs inherent in this conflict, “mowing the grass” periodically cannot be an acceptable long-term plan. Both sides need to take real pains and make real gains by way of a political arrangement that acknowledges the strategic concerns and historical grievances of both parties. As Israeli peace activist Gershon Baskin recently disclosed in The New York Times, Jabari received a draft plan for an extended mutual ceasefire with Israel – the idea of which he himself had allegedly approved just hours before his assassination.

Hamas must replace guns and rockets with diplomatic pressure, and to do so it needs to settle on some kind of formula, perhaps even conditional at this stage, that would recognize Israel’s right to exist. Violence can only beget violence. Israel for its part needs to ensure that Gazans are able to live in dignity with access to the resources required for full human development.

No one expects Israel and Hamas to kiss and make up. But if the demographically elected representatives of each territory truly place their peoples’ interests above all else, there really isn’t any other choice.

This article by Open Briefing contributing analyst Kevjn Lim was originally published by The Jerusalem Post on 20 November 2012.