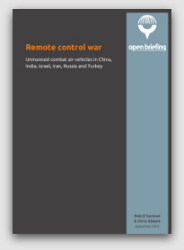 The introduction and development of unmanned aerial vehicles (UAVs) and unmanned combat air vehicles (UCAVs) by an increasing number of countries is creating both new opportunities and complex challenges.

From an Intelligence, Surveillance and Reconnaissance (ISR) perspective, drones provide a hitherto unimagined ability to observe in real-time the terrain over which one may conduct operations, plus the location and disposition of enemy troops and equipment. However, we are on the cusp of employing armed variants in far greater numbers, with software that is gradually taking the human decision-maker out of the loop. It is akin to the World War I transition of aircraft from purely observation roles to that of fighters and the revolution in aerial combat systems that followed.

The development of UCAVs has been possible because of three converging trends. First, aircraft have become increasingly autonomous, with computers taking over more of the targeting and weapons delivery functions. Second, missiles have become more sophisticated and capable of functions, such as target selection, which were previously carried out by the weapons platform. Third, new technologies have made UAVs capable of greater performance levels. Their increasing use is partly down to a fourth trend: vastly improved ISR capabilities (itself partly thanks to UAVs), which allow high-value targets to be tracked and targeted while potentially reducing civilian casualties and other collateral damage.

Not surprisingly, there are countless challenges associated with this phenomenon. Chief among these from a military standpoint is the development of sound operational doctrine in order to successfully integrate these systems’ capabilities. The speed with which drones are being developed is far surpassing the imaginations of military planners. When some of these first unmanned systems were used by US forces on the battlefield, impressed military decision-makers were criticised for acquiring a ‘looking down the soda straw’ perspective, whereby they favoured the images UAVs were returning at the expense of awareness of the wider battle space. This made them prone to imbalanced operational decisions. Since then, commanders have learnt how to better maintain situational awareness by viewing the capabilities of such platforms from a distance.

There are wider issues to consider though. Now that ‘drone strike’ has become a household term, a plethora of legal and ethical issues have rightly surfaced. Not least of all the fact that UCAVs are being used for missions that would not likely be approved if more traditional aircraft systems were being used. For example, it is hard to imagine the continued violation of Pakistani airspace by US bombers targeting remote villages in the northwest of the country. Somehow, the use of remotely-piloted systems has temporarily sidestepped international law. It is viewed as a grey area when, in fact, no such ambiguity really exists. They are weapons platforms. The location of the pilot and the type of platform used to deliver a missile should have no relevance to the legality of that strike.

Numerous other questions have arisen as the technology has outpaced our ability to control its use. Should we allow fully autonomous armed systems to be deployed? Do we need a proliferation control regime specifically for armed drones? What impacts do repeated attacks have on the psyche of targeted populations? Are drone pilots more or less likely to suffer from post-traumatic stress disorder than conventional pilots? While not within the scope of this study to address such wider issues, they bear mentioning from the outset.

Much of the debate over armed drones has focussed on their use by the United States. As the leading country in the development and use of UCAVs this is understandable. It has lowered the threshold for the use of lethal force and pushed back the limits of counter-terrorism efforts to include the targeted killing of its own citizens abroad. However, 75 other countries are known to have UAVs, with approximately 20 countries possessing armed drones (though estimates vary widely). Many of these countries warrant closer attention; after all, a risky precedent has been set.

This study focusses on six of these countries: China, India, Iran, Israel, Russia and Turkey. It identifies the UAVs in use by each state (see Annex A) and examines in more detail the UCAVs they have in their inventories (see Annex B). In doing so, Open Briefing has identified at least 200 different UAVs in use or in development by the countries in question, with 29 of these being UCAVs. The likely future use of armed drones by each country is also assessed in light of current military doctrines and national security realities.

Some general findings are worth highlighting here. The vast majority of military UAVs in each country’s inventory are unarmed (used for ISR), though many of these can take various payload options, including missiles. In fact, UCAVs are being used to carry far heavier payloads than previously possible. China has the most diverse UCAV inventory, though Israel leads the way in terms of technology and export. All the countries studied are expanding their UCAV industries. Domestic manufacturers are preferred but countries are purchasing some modern drones from abroad. The proliferation of drones to state and non-state adversaries is leading several countries to seek to develop UAV countermeasures. Finally, with the development of loitering munitions and the retrofitting of legacy aircraft or development of new manned/unmanned systems, the lines between missiles and drones at one end and drones and aircraft at the other are increasingly blurred.

This study was commissioned by the Remote Control Project, a pilot project initiated by the Network for Social Change and hosted in London by Oxford Research Group. In undertaking this work, Open Briefing has drawn on a wide range of sources, including defence equipment exhibitions, defence company brochures, foreign media, defence news, military reference books, NGO databases and military forums.

It is clear that armed drones, their uses and their proliferation are issues that are widely misunderstood and surrounded by inaccuracies. This study is offered as one contribution to addressing that situation.