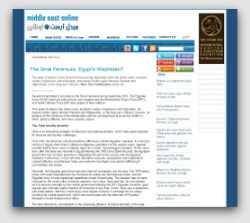 Several armed attacks occurred on the Sinai Peninsula during September 2012. The Egyptian Army (SCAF) and local police forces were targeted, and the Multinational Peace Force (MFO) and Israeli Defense Force (IDF) also appear to have suffered.

This spate of attacks has drawn overly simplistic media comparisons to Waziristan, the lawless border region between Pakistan and Afghanistan, as well as comparisons to the drug war in Mexico. However, an analysis of the intentions of the stakeholders and the consequences of an armed conflict in Sinai paints a different, and more complex, picture.

Sinai is an interesting amalgam of influences and political attitudes, which holds great potential for tensions and security challenges.

First of all, the Sinai differs culturally and ethnically from the Egyptian mainland. It is the only territory in Egypt where there is an indigenous Bedouin population (in the western oasis, regional nomads tend to focus more on the Sahara region as a whole, beyond Egypt’s borders). At the same time, after the Sinai was returned to Egypt following the 1978 Camp David Accords, the Egyptian government has not been proactive in integrating this part of the country with the Egyptian mainland. Furthermore, in line with their alternative economic perspectives and independent cultural attitudes, local Bedouin tribes are involved in the illegal cross-border trafficking of commodities and people.

Secondly, the Egyptian government has less than full sovereignty over the area. The 1978 peace treaty with Israel stipulated that the Peninsula be divided into demilitarised zones, and the Egyptian Army’s local operational capabilities remain limited today. The situation has not been improved by the recent influx of diverse weaponry from Libya, Gaza and Iran. An even greater lack of security oversight by the central government following the 2011 Egyptian revolution gave radicals and criminals relative freedom of movement in the Sinai. In fact, there was a settlement with tribal leaders, stipulating that they would enjoy some degree of liberty in exchange for not unduly troubling the central government, which was preoccupied with the aftermath of President Mubarak’s forced departure from office.

The third element for consideration is the increasing influence of radical elements in the area, including jihadists, Salafis, al-Qaeda operatives and Palestinian fighters. Until 2005, several attacks had occurred in Egypt but most of them were perpetrated by radical Islamist elements and focused on the tourist centres in south Sinai (such as Sharm-el-Sheikh and Taba) and Luxor on the mainland. Traditionally, the Bedouin populations have distanced themselves from radical Islamic ideology; however, resentment towards the central government in Cairo has increased, chiefly due to its neglect of the region. Furthermore, frequent contact with fighters via smuggling activities to and from Gaza following the newly installed Hamas government in 2007 have resulted in an increasing interest in radical Islamic ideologies by the local population in Sinai.

Serious security incidents, such as the shoot-out with the Israeli Army that resulted in the killing of several Egyptian soldiers, as well as an armed attack on the El-Arish police station, caused SCAF to send in troops in the summer of 2011. Operation Eagle provided short-term stabilisation and increased control over the region (through roadblocks and checkpoints) but was never intended to completely defeat the radical elements in full-blown warfare. Given the circumstances, which include the absence of a central political establishment and the volatile political situation in Cairo that lasted over a year, the military operational limitations were understandable, although it appears that the operation has been insufficient as demonstrated by the attacks in recent months. These attacks, which killed dozens of Egyptian soldiers in the summer of 2012, appear to have alerted the new central authorities in Cairo.

Many were sceptical when, after a drawn-out election process, the Muslim Brotherhood candidate, Muhammad Mursi, took office. As the personification of the Brotherhood’s first moment of political power in Egypt’s’ history, the newly elected president set out to live up to the expectations of so many. He has made public statements on political events in the Middle East, such as the Syrian crisis, and established a relationship with Iran, while at the same time reaching out to the West and trying to put Egypt back on the regional political map. He has also been keen to keep a careful balance between domestic policy towards radical Islamic elements in society and swift operational decisions following attacks in the Sinai Peninsula. The 2012 Operation Eagle II (or Operation Sinai, as it was recently called) stunned everyone when Egyptian Armed Forces used heavy weapons in pursuit of radicals in Sinai.

Israeli and Egyptian intelligence services have had appropriate coordination mechanisms in place and have frequently exchanged information over the years. This has continued with the new Egyptian government. Mursi may take the opportunity to create momentum and attempt to force changes in some paragraphs of the 1978 peace agreement with Israel. Israel is unlikely to respond enthusiastically and it remains to be seen whether this will be one of Mursi’s political priorities in the near future. Mursi may consider it enough for now when Israel allows Egypt to deploy appropriate operational capabilities in the Peninsula to confront the current security situation.

The Israelis are of course concerned about the situation in the Sinai. If security deteriorates further, tourist resorts in Eilat will suffer and the Negev Desert may become a military zone. (There are further Israeli concerns over African immigrants being smuggled into Israeli from Egypt, which they are attempting to control with a West Bank-like security fence.)

However, the Israeli government also has several other strategic issues to deal with. The looming conflict with Iran and the crisis in Syria may result in little inclination from the Israeli side to take a hard line with the newly elected Egyptian president. The IDF has expressed a certain degree of faith in the Egyptian capabilities to gain control over the Sinai security situation. As long as the presence of the Egyptian Armed Forces is not perceived as a threat, and cooperation continues over intelligence exchange and measures to curtail the tunnel economy to and from Gaza, the Israelis will most likely do little more than monitor the security situation.

Following the Israeli economic blockade, Gaza has become dependent on the tunnel economy. As many as 1,200 tunnels may form the underground distribution infrastructure through which supplies find their way into Gaza’s markets and shops, and are also used for moving weapons supplies. Although Hamas may resent current Egyptian measures to close the tunnels in the Egyptian border town of Rafah, they will most likely not endanger the continuity of this basic infrastructure by simply contributing to a deteriorating security situation.

Some analysts have suggested that Ayman al-Zawahiri’s assumption of the al-Qaeda leadership may have contributed to increased tensions in Sinai. It is certainly the case that al-Zawahiri (born in Cairo) may be more concerned with Egyptian issues than his predecessor, and Sinai has been explicitly mentioned or alluded to in several post-bin Laden al-Qaeda statements. Although a Sinai associate group has never been officially confirmed, several groups have been referred to as having al-Qaeda affiliations. However, although the Egyptian authorities downsized the group’s operational interests during last year’s revolution, they have recently enhanced their military capabilities locally, making it almost a matter of prestige for them; thus the failed state concept, by which al-Qaeda usually thrives, may ultimately disappear.

The security situation in the Sinai Peninsula needs close monitoring and accurate operational readiness from the Egyptian Armed Forces. The serious attacks that have occurred have prompted swift operational response from the Egyptian authorities recently and the situation is being closely monitored by other stakeholders in the area. Although the local security situation seems volatile, too many parties have considerable interests at stake in local stability, which makes Sinai’s evolution into a new Waziristan unlikely.

An earlier version of this article by Open Briefing contributing analyst Marc Van Oudheusden was originally published by Middle East Online on 11 October 2012.