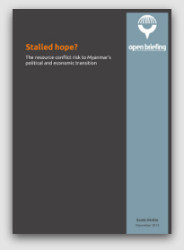 In 2011, Myanmar’s President Thein Sein’s quasi-civilian government initiated one of the most ambitious economic and political transformation campaigns of the last 50 years.

Gone are the days of international isolation. Sein has painted a vision of Myanmar shedding its pariah status and swiftly transitioning from one of the region’s least developed countries to a dynamic, emerging Asian Tiger. This is a challenging task after almost five decades of autocratic military rule, severe impoverishment and destructive armed ethnic conflict.

The reformist agenda has the potential to steer Myanmar away from historic insecurity and economic stagnation. With sanctions either removed or eased, new comprehensive aid packages signed, diplomatic relations rebooted and new bilateral defence ties on the table, a space has opened for Myanmar to build rule of law, initiate civil and political rights reform and develop a more inclusive and equitable economic growth trajectory.

These rags to riches aspirations give great hope after false starts in breaking from military dictatorship. But they also conceal complex, multidimensional political and economic challenges. Leveraging significant endowments of natural resources to achieve sustainable security, lasting political settlements with ethnic states and economic growth that supports human development will be difficult.

This briefing paper assesses the trajectory and significance of resource conflict risks and threat multipliers in Myanmar. The principal findings include: